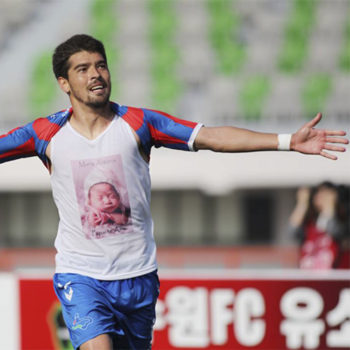 The striker Japa officially announce his retirement of the grounds at the age 31. After passages for many clubs in Brazil, the player had his best moments in Asia, playing in Japan, South Korea and China.  The featured period of Japa in his career was in the clubs Suwon FC (South Korea) and Meizhou Hakka (China).

In Suwon FC,  Japa was the second top scorer of the league (K-League Challenge 2015), scoring 22 goals and being an indispensable part of the team when they promoted to the first division. Besides that, in Meizhou the player played for 2 seasons, staying in the ground in 53 oficial matches, scoring 24 goals and giving 8 assistances.

Pecbol Sports says thanks for the partnership and wishes all the best to Japa in this new moment of his life.