Forward Ramon is presented in his new club — pecbol.com

Forward Ramon is presented in his new club 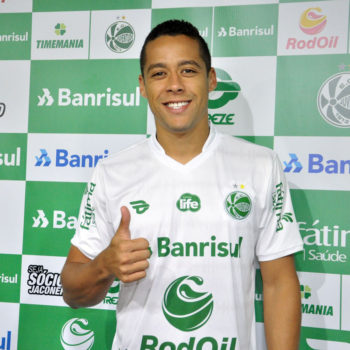 Runner-up of the Paulista Championship for Ponte Preta this year, Forward Ramon is new reinforcement of EC Juventude for Brazilian Serie B. The player was presented at the Alfredo Jaconi Stadium on this Thursday. His name has already been published in CBF’s Daily Newsletter (BID) and the player is available to the coach Gilmar Dal Pozzo, to debut in the Brazilian Serie B.

Ramon returns to the Gaucho soccer where he played a good part of his career. In 2016, he made good season in Brasil Pelotas, scoring 12 goals, 9 in the Brazilian Serie B and 3 in the Gaucho Championship.

On arrival in Caxias do Sul, the forward projected his arrival in the new club: “I’m very happy to have come to EC Juventude. I had a very nice experience in the AA Ponte Preta, winning the vice-championship of São Paulo. I like Rio Grande do Sul, and I feel at home here. I had a very good reception in the group and the technical staff supported me a lot. In previous years, the Juventude had already tried my hiring. I’m very motivated and I hope to make a great championship”, said the player.

This Friday, EC Juventude makes his debut in Serie B. The team receives Luverdense EC, 20h30, at Alfredo Jaconi Stadium.