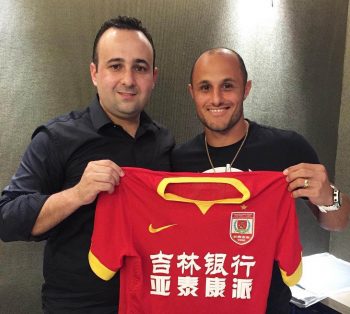 Forward Bruno Meneghel is back to Chinese Football. Highlight of Cerezo Osaka in the J-League 2, the Brazilian Forward signed for Changchun Yatai until the end of 2018.

Bruno had worked in China in the period 2012-2015, when he defended the Qingdao Jonoon FC and Dalian Aerbin with great success. In Chinese fields, Bruno has the expressive mark of 50 goals scored.

-I was only six months in Japan, long enough to create a great affection for Cerezo Osaka, its fans, group of players and coaching staff. I thank everyone for everything they have given me. In Changchun, I hope to repeat everything I did when I worked at Qingdao Jonoon FC and Dalian Aerbin. My expectation is the best possible return to work in this country, where I was so successful, said the Brazilian Forward.

In the Changchun Yatai, Bruno will have company of Bolivian Striker Marcelo Moreno, player who came to China in 2015 by Pecbol Sports.